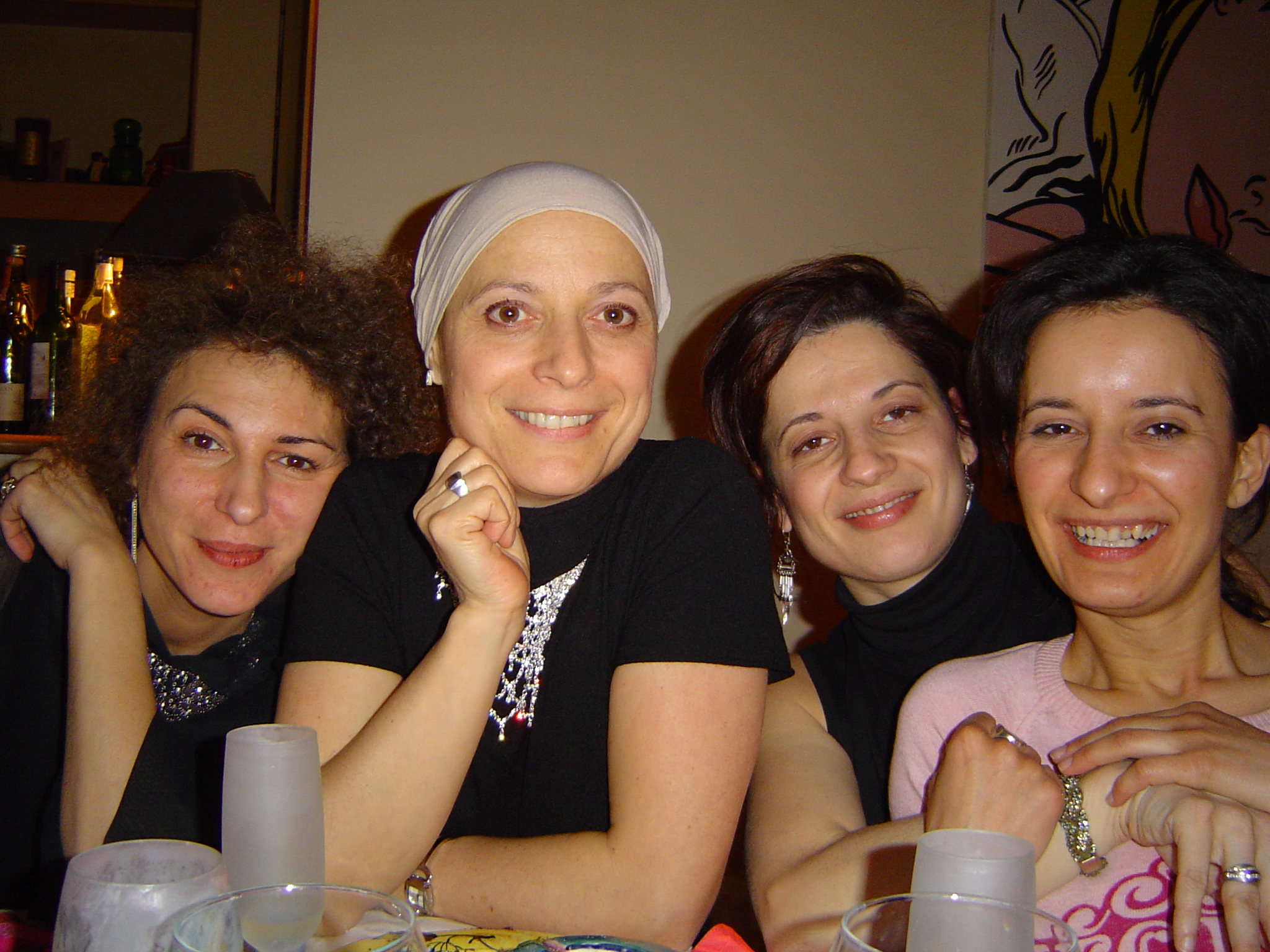 Paris. 2005. With my girlfriends Antonella van Rumund (to the left), and Carole Pean Mathurin and Laurence Brunet (to the right). A month or so into chemo after being diagnosed with my first breast cancer, and shortly after I first started practicing yoga.

A life-threatening disease was the catalyst that first brought me to yoga. And once I discovered Yoga Therapy—I knew I had found my ”home.”

In a way, I came across Yoga Therapy the very first time I did yoga. It was end of 2004 in Paris, France. I had gone through surgery for breast cancer (#1) a month earlier, and felt hopeless and exhausted.

A friend dragged me to a yoga class at Aline Frati’s home studio. We were the only two students. And in that hour and a half, I went through a complete transformation. For the first time in my life, I actually connected with my body and felt its deep-rooted aches as well as its message of hope.

Aline has an incredible intuition about her. She has the ability to sense the students in her class like no other teacher I’ve ever met. And she’s able to deliver exactly what each person needs, at exactly the right moment. “The yoga I teach helps a person become aware of repetitive patterns –anxiety, fear- that come from early childhood, and free that energy up so it’s reintegrated in the body’s global energy,” she once explained to me.

After my treatments, I knew that it was my calling to teach yoga--to share with others the type of healing and transformation that I had experienced.

Love made me do the big leap from Paris to Atlanta, GA, in 2006, and three years later I started a 200-hour yoga teacher training in the city’s largest yoga training center, Peachtree Yoga Center. It was the first time I had ever stepped foot into an actual yoga studio. But soon after I began the training process I realized that something was amiss. This yoga felt drastically different from what Aline had introduced me to during that vulnerable period of my life.

An incredible Phoenix Rising Yoga instructor, Betsy Blount, taught there. Still, many of the classes were for “fit” students. I felt far from the powerful healing connectivity I felt back in France. Sure there were other types of yoga that were more gentle and restorative but still didn’t quite unite my spirit with my body and mind in the manner that I was seeking.

I started doubting--questioning if I had made a mistake. Should I teach a more “physical” yoga or restorative yoga to conform to what seemed to be the American way? Neither of these routes spoke to me. With the encouragement of mentors, I decided to stay true to myself, and start teaching my own style of yoga--the type that worked for me—“my yoga”.

I continued my training even in areas that seemed outside of the field of traditional yoga. In 2010 I trained in the art of Gestalt Therapy—an awareness practice that helps a person focus on the present moment and express their inner truth— at the Gestalt Institute of Atlanta. This was a natural move since I had personally benefited greatly from psychotherapy.

It was a year later, in 2011, that all of the dots finally connected for me. I landed in an anatomy workshop lead by physical therapist and yoga teacher, Marlysa Sullivan, who was then director of the Therapeutic Yoga Teacher training certification of the Pranakriya School of Yoga Healing Arts, in Atlanta. The workshop was part of the training’s curriculum, and for two hours, she led us in a therapeutic yoga class. Those two hours felt familiar. I finally experienced a type of yoga that was close to what I wanted to teach—geared entirely to help a person heal whether physically, emotionally or spiritually. Also, Pranakriya was based on the teachings that were the inspiration behind the Kripalu Center in Massachussetts, the largest yoga center in the U.S. which meant recognition and credibility.

Today, I am part of a new and small community of Yoga Therapists. The field of Yoga Therapy is still in its infancy, and is currently establishing its standards. A pioneer at heart, I feel I’m here to break grounds, and share with the world –maybe you one day– the benefits of Yoga Therapy.