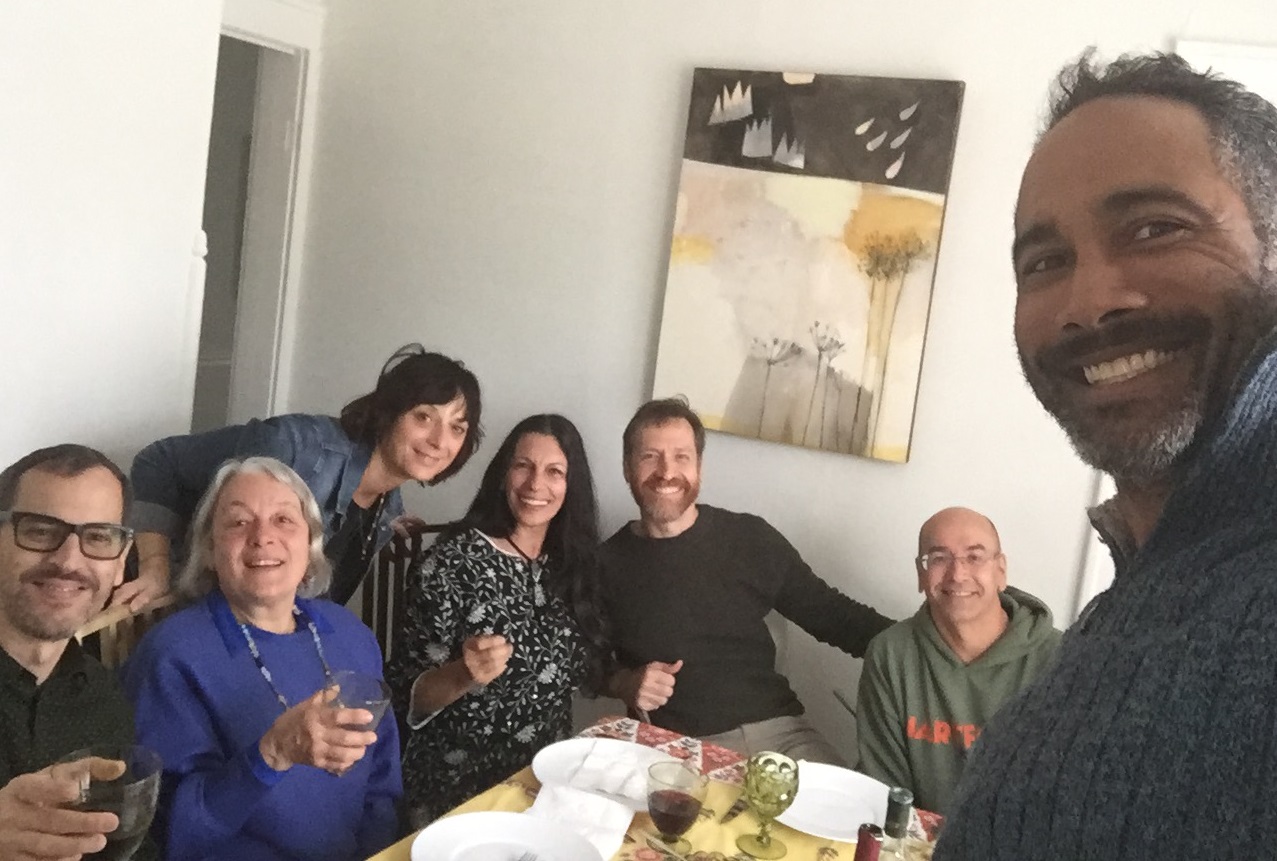 Taking the time to be together with friends for a Sunday lunch, French style, which means home-made food, wine and therefore staying hours at the table.

My journey of bonding in the past decade in the States, with its ups and downs.

Things have shifted for me recently--in a good way. I’m rediscovering the joy of being connected with others. I now have friends who call me, text me, stop by my place. And I do the same.

We all need to be recognized for who we are, to be heard, to be hugged. In other words, we all need to bond. And since I moved from Paris to Atlanta 11 years ago, I’ve learned not to take bonding for granted.

First, there was that feeling of being uprooted. Thank goodness, I was with my new love and husband at the time. My focus was on him--on us.

Then three years ago, I returned to France to rebuild myself during what I call “the nuclear explosion”. My dad was diagnosed with lung cancer and I was diagnosed with breast cancer, all while I was separating from my husband. Once I recovered, a year later, I returned to Atlanta. By then, everything had changed--me, for a start. My friends too. The friends we had as a couple had faded away and created new friendships elsewhere. The few friends who remained in my circle were scattered around the Atlanta metro area--these American city hubs are tough on friendships! On top of that, I let go of my 20-something year job as a corporate journalist, last year, to be a full-time yoga therapist. With that move, another layer of connections-at least via phone and email, went away too.

Amidst the discomfort and shock from all of the change, I almost decided to move back to France, when suddenly, this spring, everything changed. I started meeting people who recognized who I am. I mean, a bunch of people. All at once.

I met people who had done crazy things—just like I had. I met people who instantly understood what I do in yoga therapy. I even met people who remind me of me when I was 17 taking drama classes in Paris. (Yes, there was a time I wanted to be an actress.) Picking up pieces of myself I left along the way, being recognized and heard for who I am now, showed me that life is meant to be lived, not a struggle.

It was during those three tough years, though, that something changed within me, which laid the foundation for the transformation that occurred this spring.

I paused. I started turning my gaze towards me, seeing and recognizing who I am, the making of my own soul. For the first time, I decided I was not going to wait for someone else to recognize and approve of me. I started recognizing my beautiful side as well as my shadow side. Then, I started feeling love for myself. Slowly, steadily, surely. Love, in all its forms and shapes, needs to start with oneself. There is just no way around this if we want to live a joyful life. And sometimes it takes a nuclear explosion to get there. David Peace, the pastor of my little church, said it quite eloquently, “It’s in the darkness of the soil that the seed grows”. 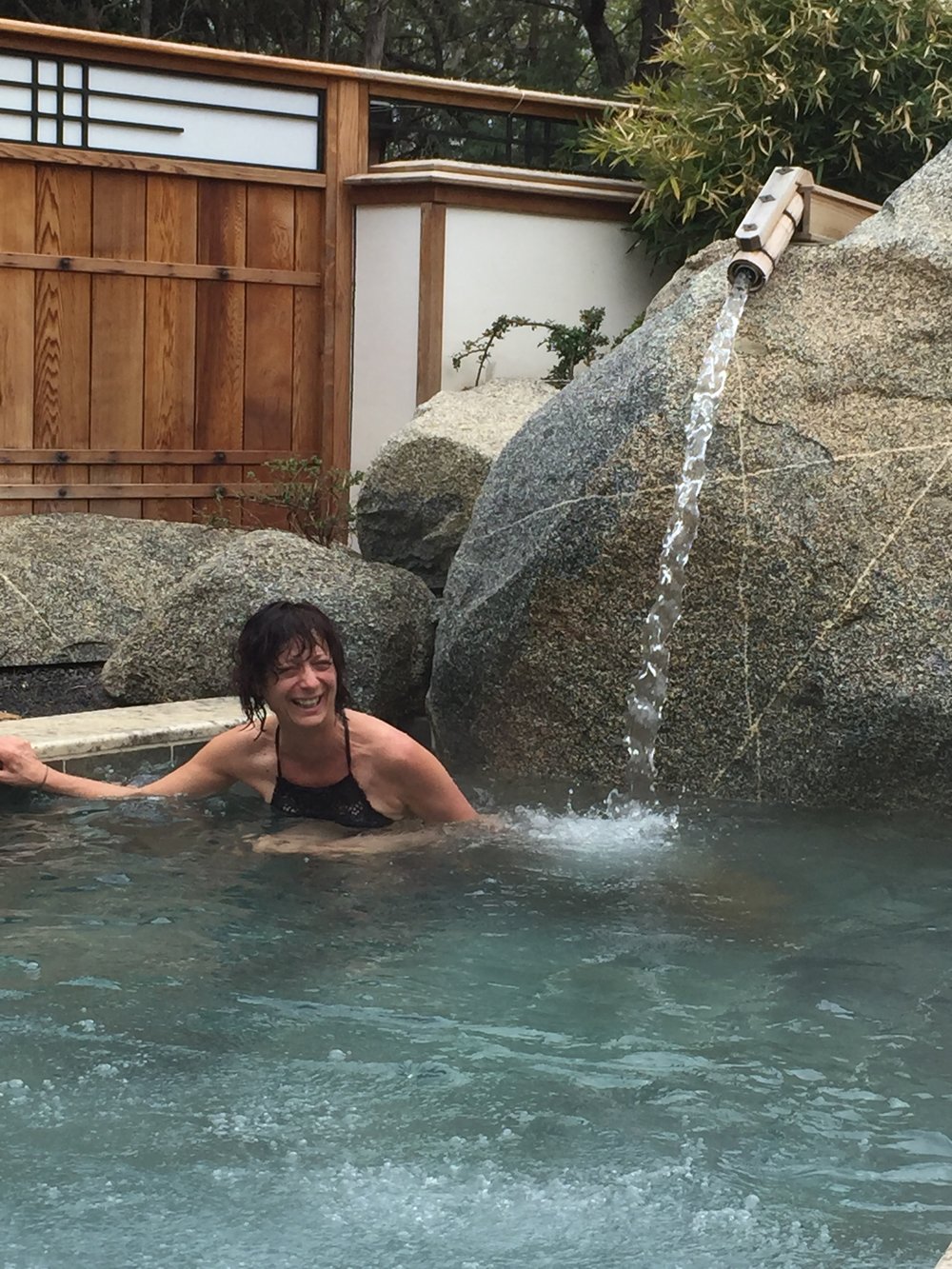 April 27, 2017. Imagine a Japanese garden in the mountains of Santa Fe, New Mexico, with hot tubs, saunas, the sound of water and birds... Ten Thousand Waves is the most awesome spa experience I've ever had.

Learning to listen to our body is a beautiful gift we can give ourselves. Yoga therapy helps do just that--listen to our body, un-knot the muscular structure, feel fully in the moment and find the words to say who we are and what we feel. All crucial steps in our healing journey.

If we’re not sure of how we feel about something, our bodies hold the key to helping us determine our truth. All we have to do is listen. That’s because our body has a consciousness. In fact, our body is the exact reflection of our soul, and goes through our life’s experiences–whether positive or negative—just like our soul does.

For example, when we’re around a person who brings us joy, we feel comfortable and relaxed in our body. On the contrary, when we’re in the company of a person who we feel is hostile, we feel tense and unease. If we could step out of our skin and see ourselves, we would see how much our body language speaks to us.

Sometimes, we experience something that puts us so much in despair that there is no way to vent the grief and the pain. Both feelings become buried in the body.

Dr. Alexander Lowen (1910-2008), American physician and psychotherapist, developed a specific type of body psychotherapy called Bioenergetic Analysis, and worked all his life on the continuity between body and mind. He said “Every chronic muscular tension in the body has associated with it sadness, fear, and anger.”

I see it in my clients and I see it in me. A wound, when not healed, will show itself in the body in one form or the other—through a muscular restriction, or shallow breathing, fatigue or even an illness.

That’s when yoga therapy –which is delivered on a one-on-one basis or in small group settings-- kicks in. First, the practice requires that you pause--a must in the healing process. Healing only occurs when the body and the mind are relaxed, not when on the go. Then, the yogic breathing associated with the movements help you go inwards, un-knot the musculature structure, and read your body’s messages.

Yoga gives you access to your wound, helps you become fully aware of it, feel and sense it completely. Exploring and recognizing your wound, what is weighing on your heart will, in turn, help you express the grief through words and even crying releases. All for the sake to clean the wound and let the healing occur. The process may be challenging at times as we have this natural feeling of being scared of approaching our wounds. Still, when we do the work, it always brings us to a state of feeling more alive and experiencing more joy. And that’s the beautiful thing about yoga therapy.