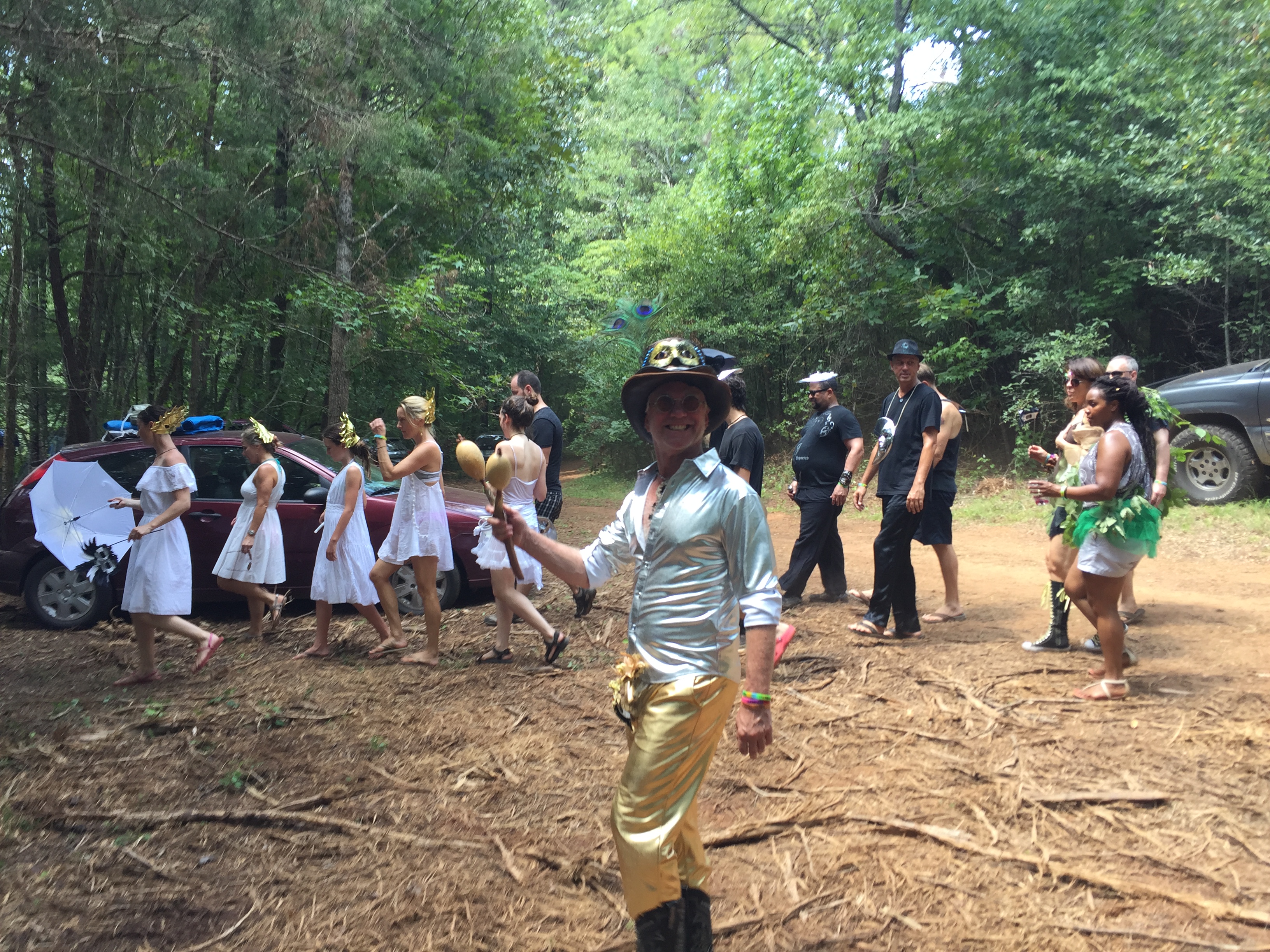 Dave Webster, one of Avalon's landowners, leads the Eclipse Ceremony Parade on August 21 to get us ready to view the eclipse. We're on the path of totality!

From a celestial wedding to finding my soul's home. Here's my journey.

The universe, as well as my “stuff”, has shifted with the total solar eclipse.

August 18th, mid-day. Here I am, arriving at the gate of Avalon, a beautiful piece of wooded land with a river and a lake in South Carolina. I’m getting ready to camp for four days to join Avalon’s Total Solar Eclipse Festival and my friends, Stacie and Art’s, wedding. Avalon is greeting me with a blue sky and bright sunshine. Emotionally, my own weather report is different. I’m navigating a romantic heartbreak.

Over three hundred people are expected to join in this celestial weekend and I won’t know anyone other than a handful of yoga-teacher-friends.

The first person I meet is Helme, a soft-spoken, handsome guy. He’s setting up what looks like a Middle Eastern campsite in the forest. “Is this your camp site? It’s huge,” I say. “Yes, people like to stop by so I make it nice.”

Helme offers to give me a tour of the land on his golf cart. I feel a soothing, healing energy from my new friend and the people that are setting up their camp here and there. The land itself, is also giving me great vibes. We stop in a shaded spot by the river and instantly I know that this is where my tent belongs.

Little by little, strangers arrive and set up their camps around mine. Michael, aka “Oz”, is experimenting with a hammock-tent extended between two trees. “Let’s see if this is better than sleeping on the ground.”

Have I ever shared that I’ve often, if not always, felt misplaced, mis-fitted—like an outsider? Being sensitive and a people-lover has done that. As a child, I always comforted the kid who was rejected. Growing up, I wanted to be a dancer or an actress. Back then I didn’t see who I was, so I gave up those dreams, one after the other, for a “responsible” job. In the corporate world, I was an “internal journalist” which meant I met people, asked them questions about who they were and what they did, and wrote their stories in company magazines. I managed to have a role helping people feel good—at least about their professional selves. On the personal level, I’ve always had a hard time imagining myself in a “traditional” life—you know, married in my twenties, my husband and I raising our kids. Instead, I married, later, a man with a big heart although, at the time, he saw little of who I was—someone who needs to share her soul, not so much the material life.

Back to Avalon. After two days of strolling from my camp “neighborhood” to the meadow, from the meadow to the waterfall, from the waterfall to Avalon’s social area, here I am dancing in front of the stage where an Atlanta band is performing. It’s almost midnight. My friend Gloria grabs my hand, “follow me, we’re all meeting at Helme’s.”

There’s a fire pit in the middle of the large tent, and seven maybe ten people lounging around it. A young woman, Emily Kate Boyd, an Atlanta singer and songwriter, is playing the acoustic guitar and singing a soft song. More people enter the tent as the night goes by. A man plays the flute, and before long, three women play the fiddle. All spread the space with magic. A woman stands up and dances around the fire. When a musician sings “A Horse with No Name” with his acoustic guitar, my feet propel me upwards. Here I am, dancing too. Here I am, feeling I’ve found my tribe. Zero excuse needed for being the way I am. Zero excuse needed for feeling the way I feel.

I came to Avalon to celebrate Stacie and Art’s love, see the total solar eclipse, and camp in nature. In the end, I realize I’ve found my home. How about that? 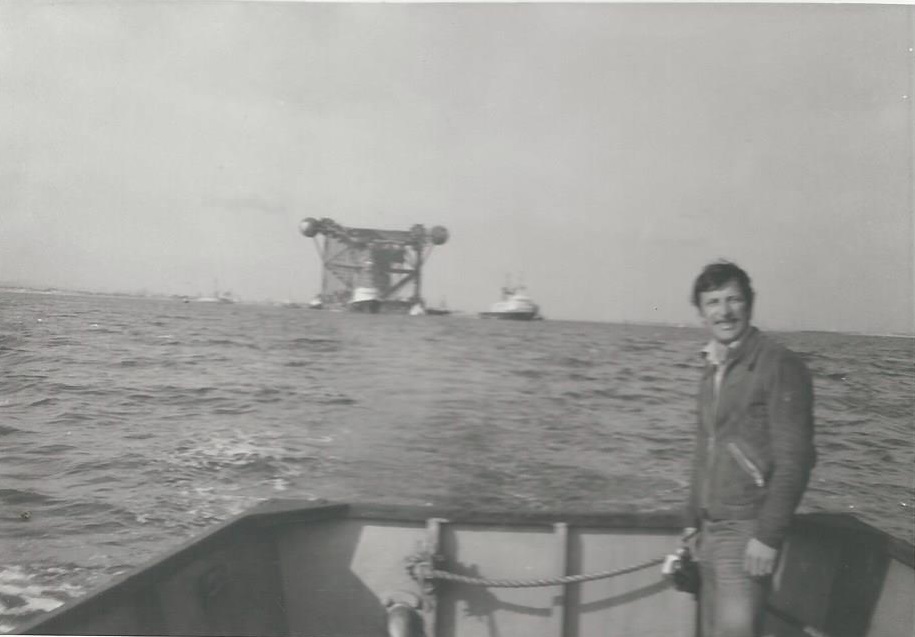 England, 1972-73. A French man in the UK North Sea. A builder and an adventurer at heart, my dad, Jean-Louis, overlooked the construction of a "jacket", the metallic structure that supports an oil offshore platform. This was the day the "jacket" set sail in the North Sea.

Two years today since my dad went to the other side. Time for a letter...

It’s been two years to the day since you passed to the other side. I miss you. Thank goodness, I feel your presence. Always.

After you passed, mom asked me what I wanted to keep out of all your stuff. Your hi-fi music system—the one you bought in England in the late 70’s--and your collection of vinyls were the first things that came to my mind. While I was in France this past month, I listened to your music, many from Latin America--samba, bossa nova, flute of the Andes—while lying down on the couch. With my eyes closed, I could see you sitting in your rocking chair in our living room, savoring your music—something you used to do for hours.

You’ve always loved music and dancing. Oh man, you had so much fun telling me over and over again how you first met mom. You saw her at a dance in an Italian neighborhood right next to Paris, when you were both 19. You invited her to dance. She first turned you away before finally accepting a dance with you--unable to resist to your charm, as you always said. Since then, you two danced every time you had a chance.

You had a work capacity that was out of the ordinary. It was fueled by the fear you always had of not having a roof above your head. Your family marginalized you when you were 17, so you left home, and slept under the staircase of Parisian apartment buildings until you had enough money to afford a hotel room.

Remember when I was five or six? As a carpenter, you brought me with you in your Parisian workshop on Saturdays. Ah the smell of wood… A little later, you sometimes took me with you when you supervised workers on construction sites. You talked with them about the week’s work while we all had charcuterie together for morning break. That’s taught me to adapt anywhere. Today, I cruise from one community to the next, in Atlanta, regardless of people’s economic status, religion, color, and whatever other characteristics.

You had the soul of a sailor and worked on the oceans, on oil rigs, for over 20 years. Maybe that’s got something to do with me living at the other end of the world.

A disease is a shortcut. Shortly before you passed, you succeeded to give yourself over to softness in our relationship. Remember our very last phone conversation? You told me how proud you were of me--of the way I had fought to become a yoga therapist--in America, on top of that. You said “chapeau!” (“hats off!”) to the fact I never gave up on my dream of teaching my own style of yoga. With those powerful words, you finally recognized who I was.

My yoga activity is starting to take off. Can you imagine? I’m actually helping people dance their body and soul through yoga, and recognize who they are. Doesn’t it all make sense, now?

This coming weekend, I’m going to South Carolina, to a festival which will be followed by my friend Stacie’s wedding on the day of the total solar eclipse. My astrologer friend, Randy, says, “Solar eclipses help us to identify the crapola that we need to really, really, really work on. They are a living metaphor. They remind us... They warn us of our most serious needs both individually and collectively. They are not easy to navigate sometimes largely because the truth hurts and we feel naked and weak at such times“. I can feel my own “crapola“ come up today –fear, fear of love mainly. This morning, during my meditation, I heard you whisper, “Let the fear go, ma cherie, you’ll be fine. And I’ll be always here for you anyway“.