Here's a photo gallery to celebrate when I first moved from France to the States in Atlanta, Georgia, eleven years ago, and my blog's first anniversary. It's been a ride. 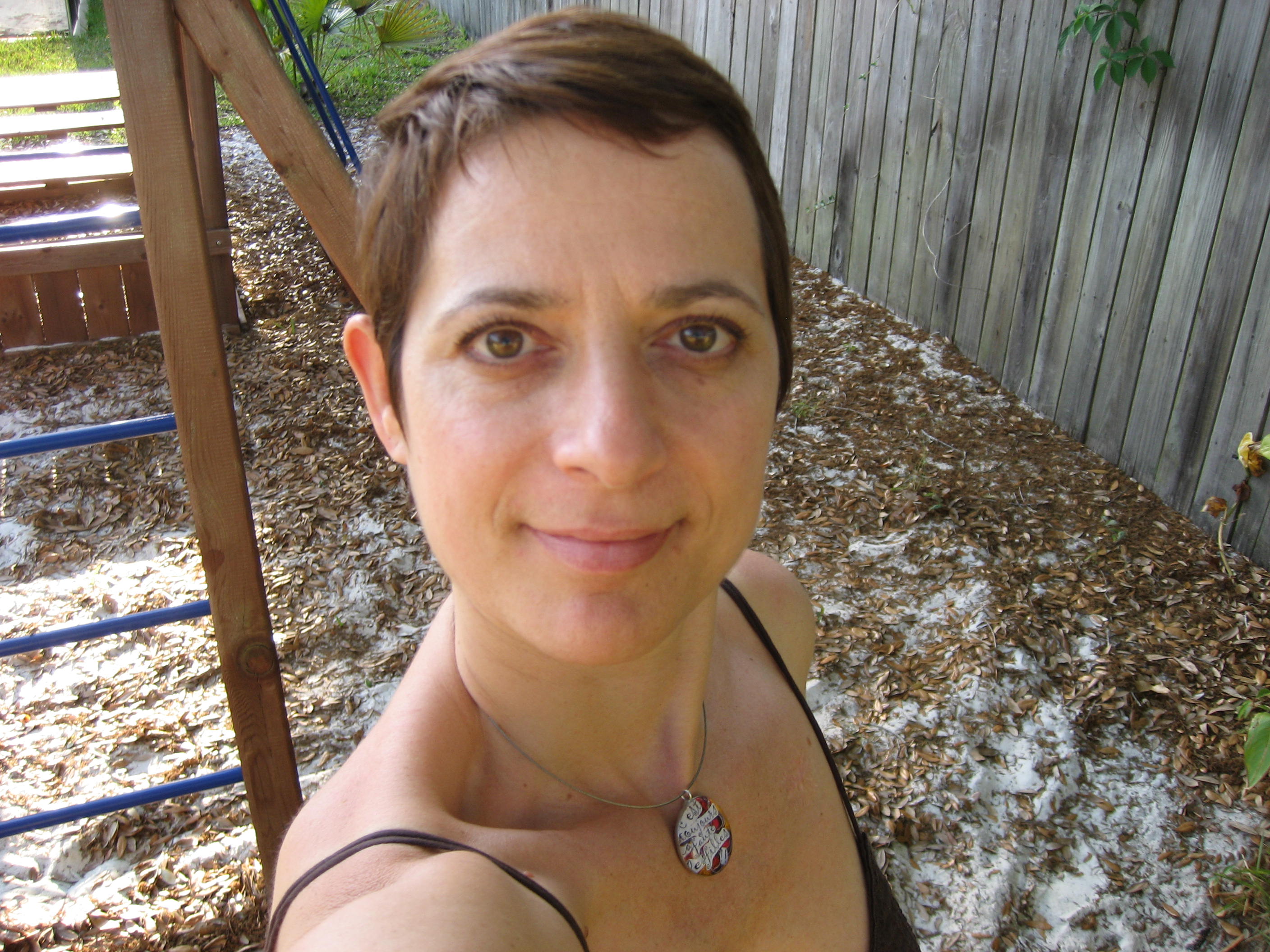 2007.
Atlanta is both enchanting and brutal. I have to re-learn everything, while exploring my new existence with my American husband. Every morning I roll out my yoga mat in our living room. The yoga I practice --and that I've learned from my French yoga teacher, Aline Frati-- helps me to dive deep inwards and navigate through the misunderstandings in my relationship, and the hazards of being a new immigrant. Still, I feel I don’t fit. Six months later, I push through the door of a therapist’s office.  He listens and says, “Be who you are”. I feel an instant relief in my chest, and keep going. 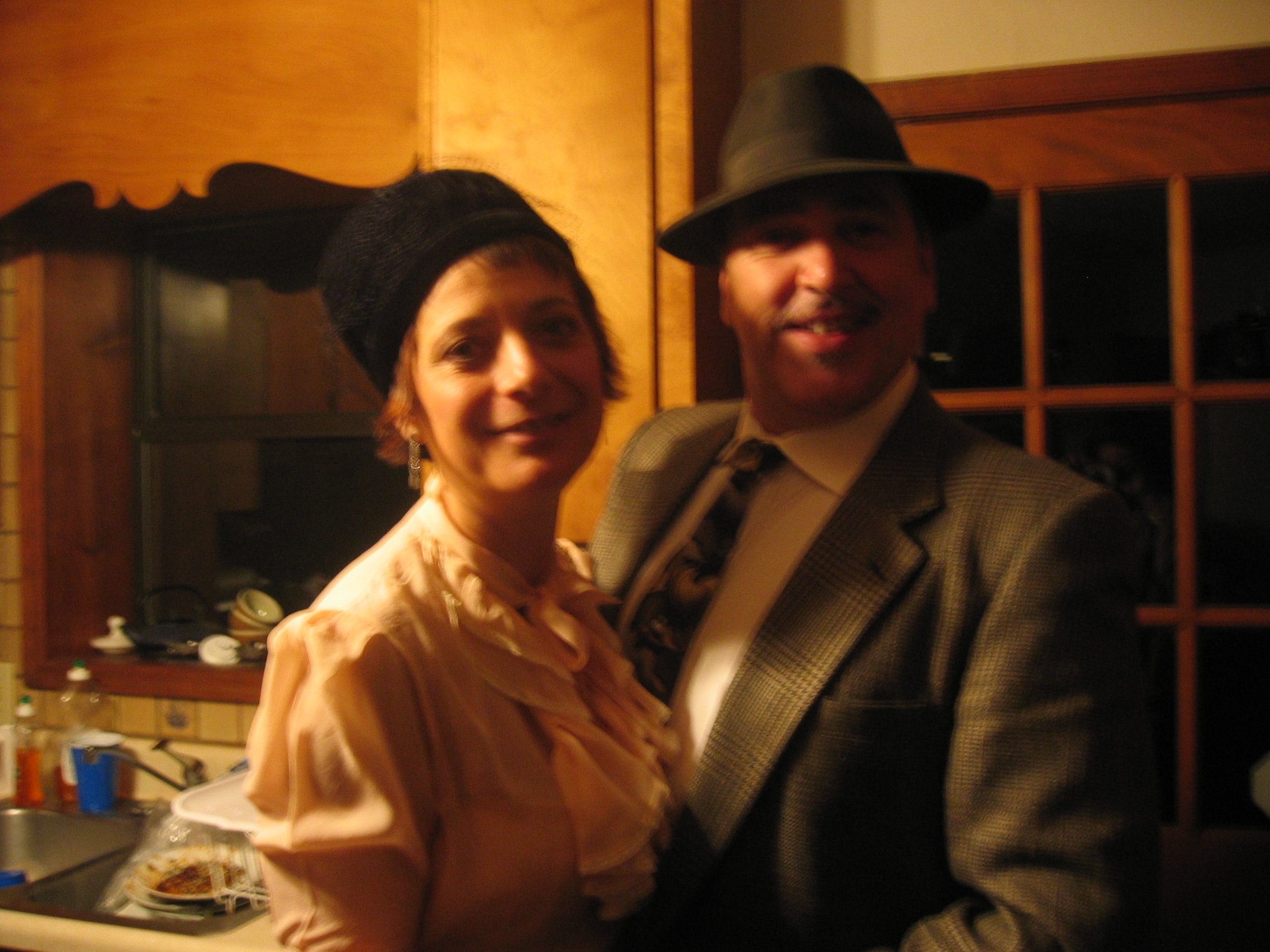 2008.
At a wedding with a theme--The 40's. Feeling isolated in this transition year. John travels for his business a lot. Thank goodness, I pick up a writing gig. I spend most days in my home office. I visit my family of choice--Valerie and Dave in Orlando, FL and Jenny and Larry in Lansing, MI. My friend Carole from Paris comes to visit. I also manage to attend, for the fourth year in a row, Aline's annual week-long yoga retreat, in Southern France. There, I pause and feel. "Teach! You're ready!" claims my yoga teacher. 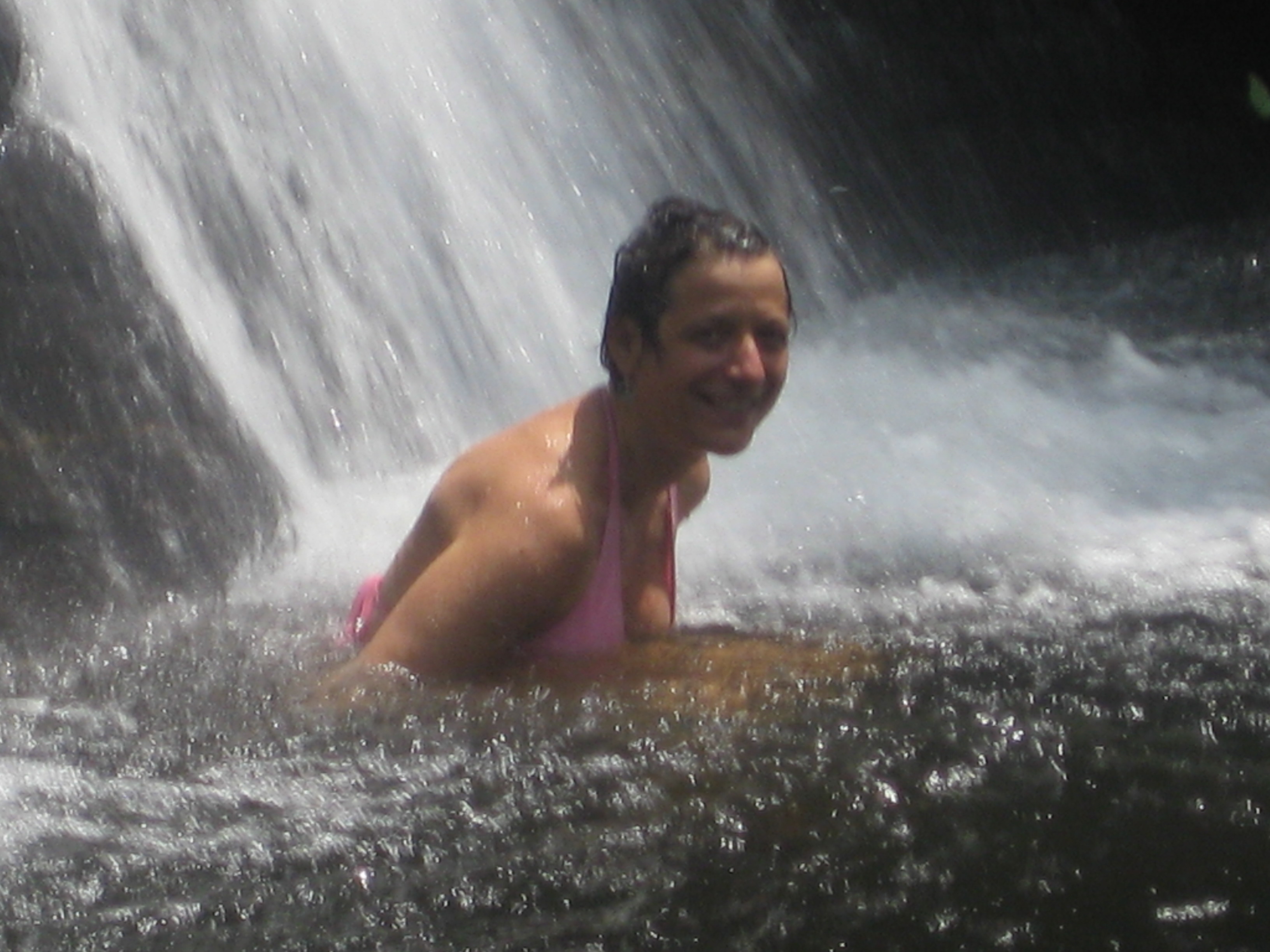 2009.
The "American dream" collapses. John is out of work part of the year. I find a huge writing project--which helps! I spend days in my home office, writing. Feeling isolated and that I have lost track of myself. What about my dream of teaching yoga? I sign up for a yoga teacher training and spend the summer building my (arm) muscles to prepare. In America, I find yoga is about fitness and strength! 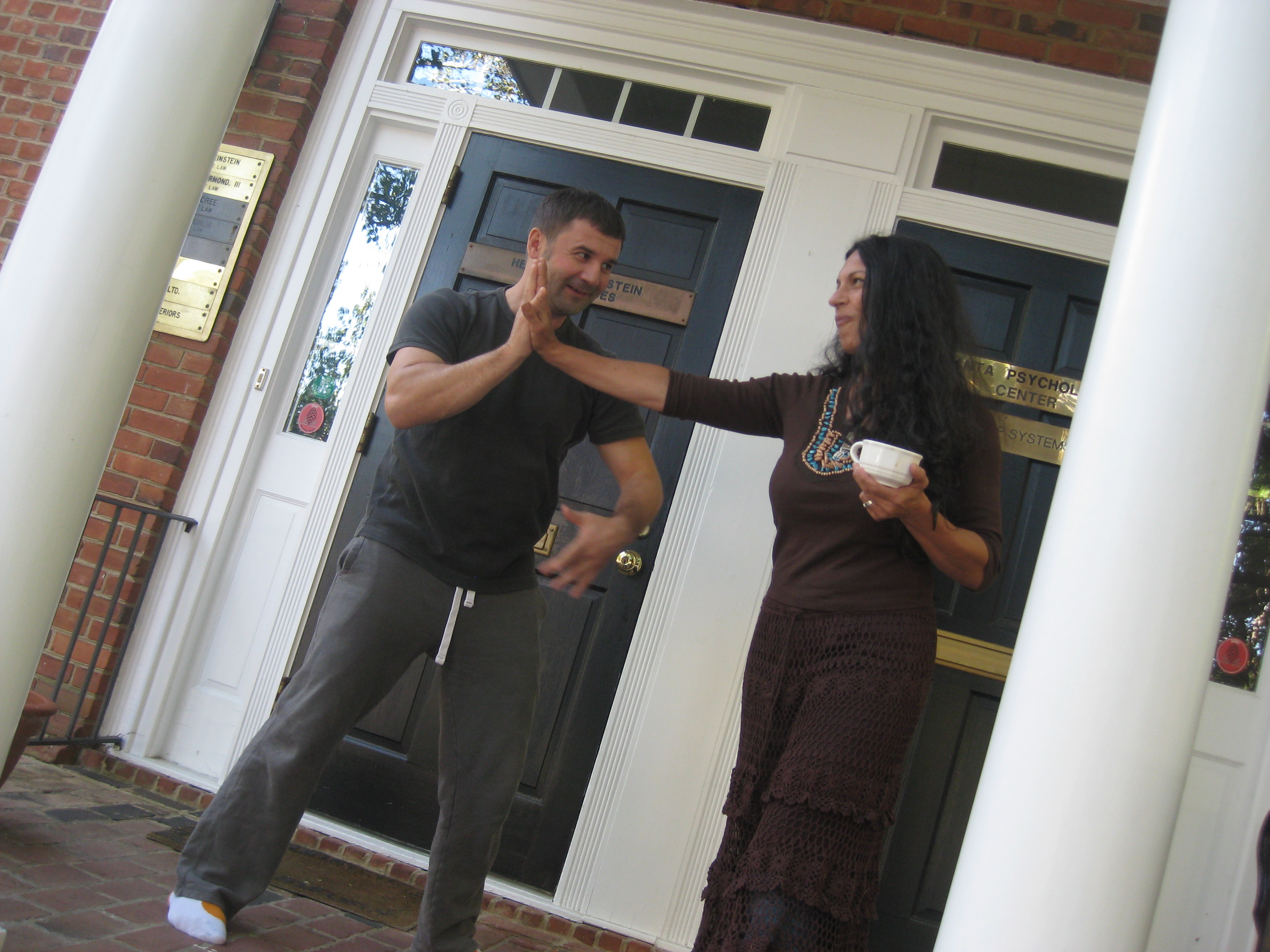 2010.
I bump into a training in the practice of Gestalt therapy. We're four trainees and Leif Roland, gestalt practitioner and trainer. All of us are foreigners! Over six months, I learn to become aware of what I feel in the present moment, to respect that, and to be fully present for others. That's where I meet Julia De Leon, my soul sister, and Ciprian Stan, who tragically passes away in 2014 from ALS. I want to teach yoga in a "new" way. My intention is to teach the yoga practice I've learnt from Aline Frati, my French yoga teacher, and complement the practice with a time where students can share how they truly feel. I give the "protocol" a name--Yoga for Renewal. 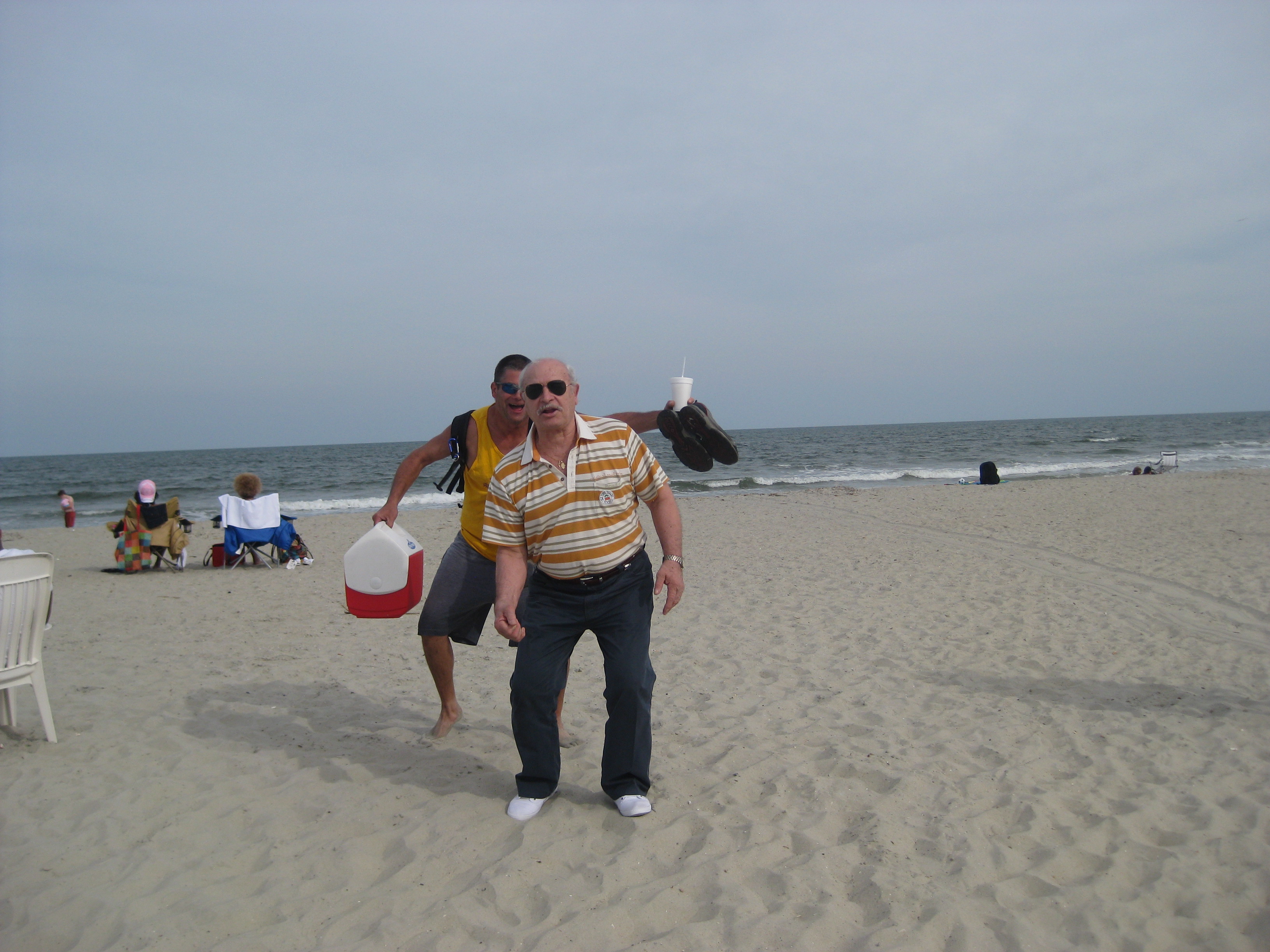 2011.
My dad comes to visit me, us. He's astonished by the cars, "they're all brand new!" and Savannah. He's also appalled by the "bad" wine that is served in restaurants. One day, while I drive him to the local fresh market, he says "you have to have killed mother and father to get used to here!" It's a French saying that we use when we refer to someone who is or has accomplished something particularly difficult. I stay silent and think, "yes, it's one way to say what I've experienced." 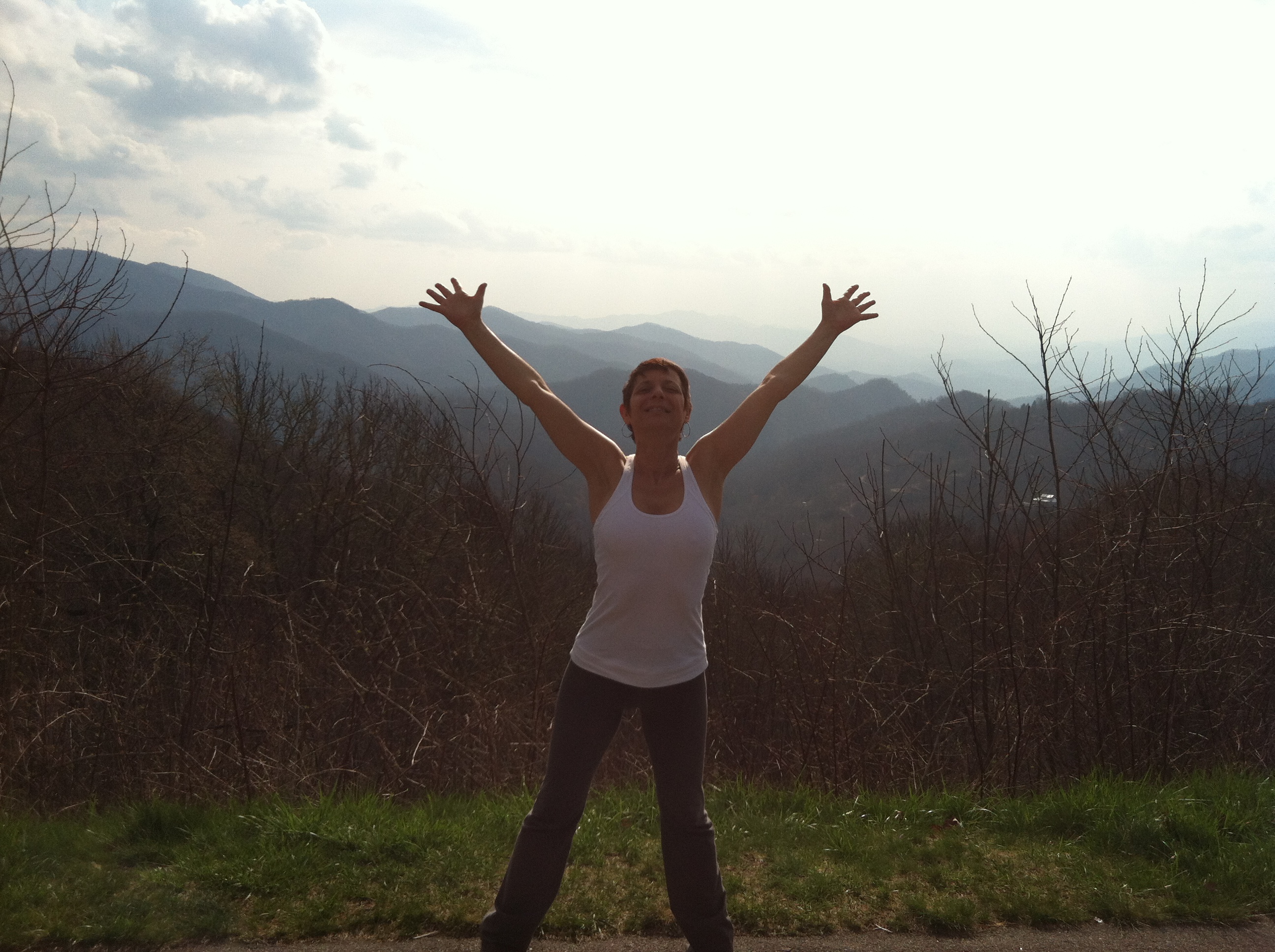 2012.
While working as a freelance writer, I train as a certified yoga therapist. I teach my first-ever Yoga for Renewal group class series in Candler Park Yoga in Atlanta. I am testing, for the first time, the power of the combination of yoga and a healing circle where I encourage students to connect in deep and personal places, all for their personal development. The students' progression over the series tells me the "protocol" works. 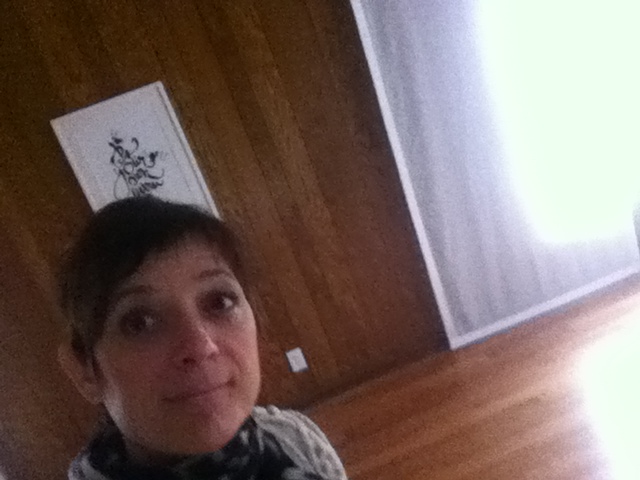 2013.
My marriage is falling apart and neither of us are aware of it. John and I buy a house in the 'hood in Southwest Atlanta, 11 miles from Atlanta's Northern suburbia where we live--an ocean apart. It's a big, healthy house --4,000 square feet--which needs lots of interior renovation. The first time I step inside to visit it, the solid stone necklace I'm wearing breaks apart, for no reason. I see the stones roll everywhere on the floor... Looking back, it's a sign. The house feels too big. I still say "yes" to the purchase because of a big den that we can convert into a home yoga studio, and to save the marriage. 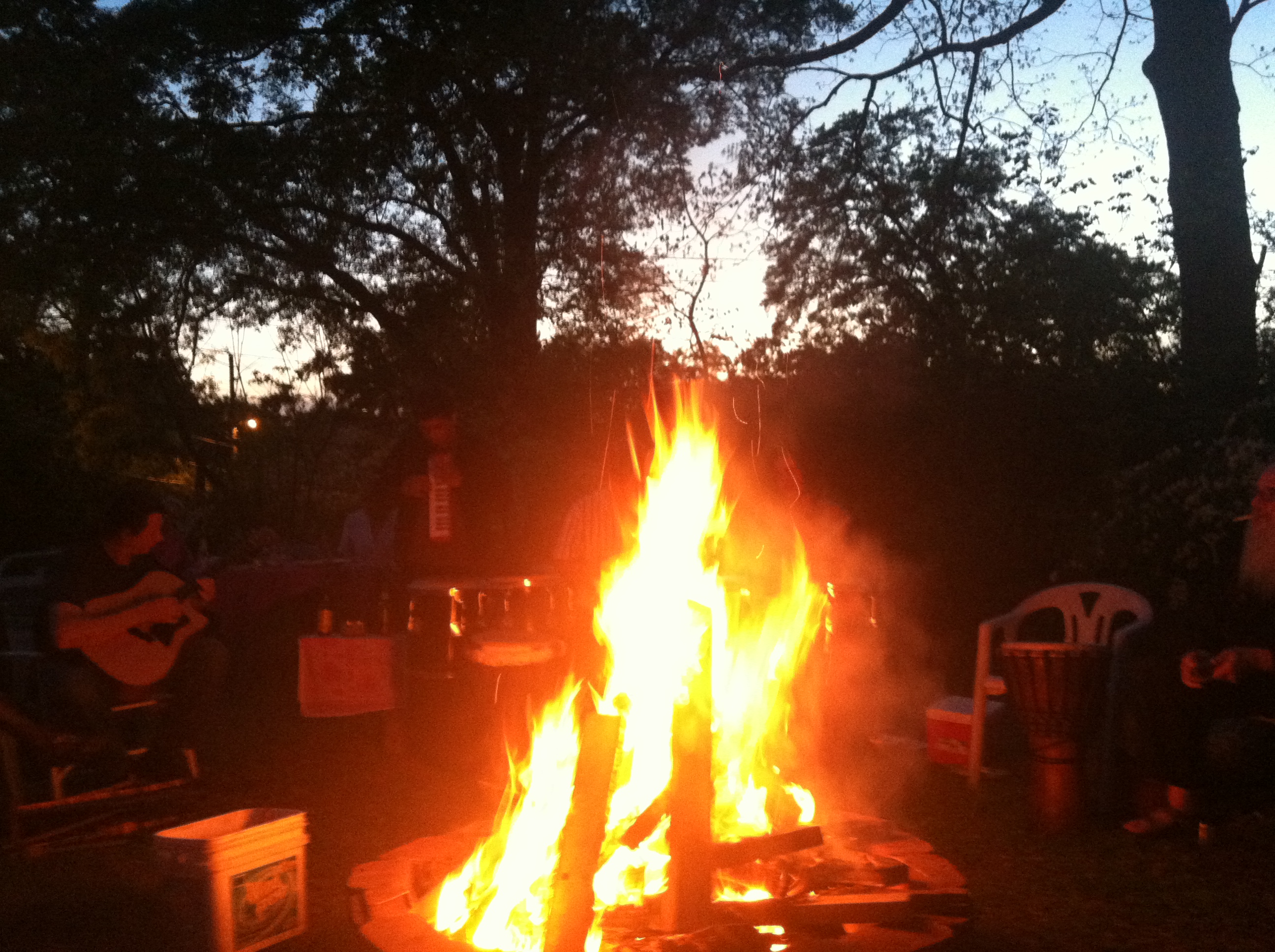 2014.
My friend Randy, a talented astrologer and coach, tells me what he sees in my chart for the coming months. "You are going to go over a big bump. It will be at the scale of an atomic explosion. After this time, you will find your purpose, the real reason why you came here." Randy is right. Within four months, John and I separate, my dad is diagnosed with inoperable lung cancer while I'm diagnosed with a second breast cancer. I move back to France to take care of myself and regroup with my family. Before leaving Atlanta, my friend Julia introduces me to her friends, a group of sensitive, like-minded people who love to connect, help make the world a better place and party. 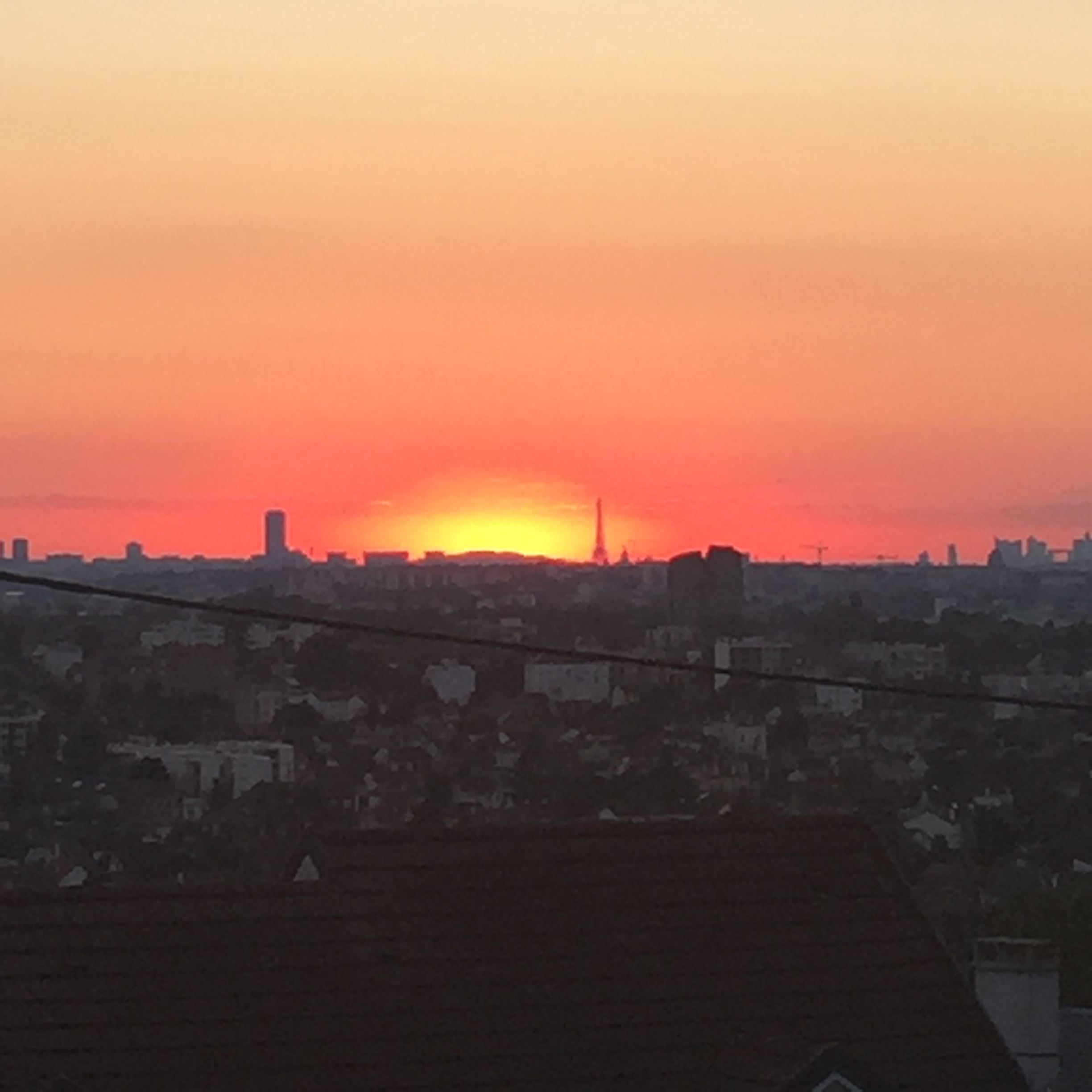 2015.
After my treatments, I return to Atlanta to divorce. Three months later, I'm back in Paris for my dad's funeral. That day, I look at the sunset from my parents' house, just outside of the city. I've looked at dozens of sunsets from their place but that evening is different. The sunset is the most beautiful and intense I've ever seen. Back to Atlanta, I infuse Yoga for Renewal with what I've learnt in the past year--a huge lot. 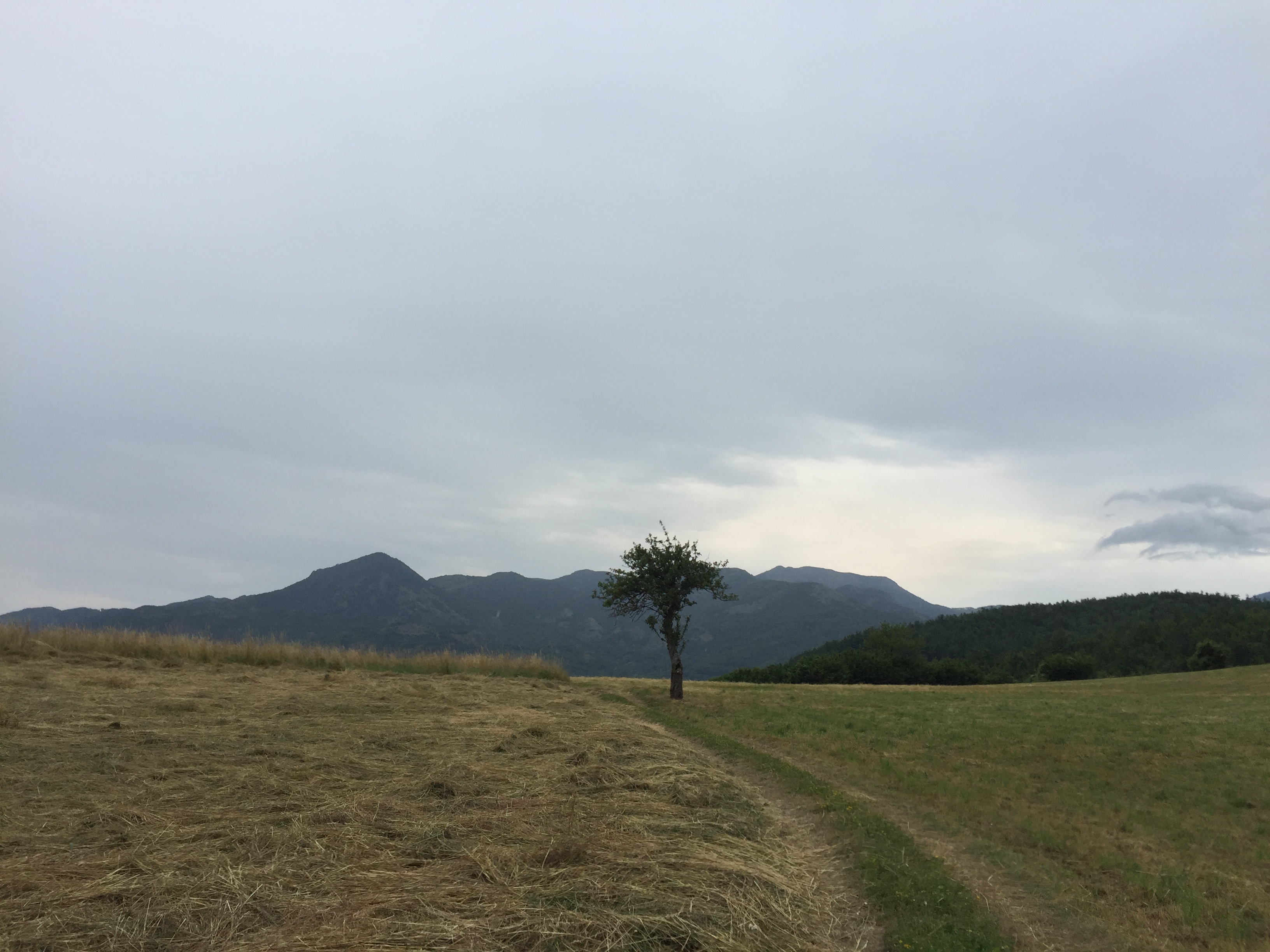 2016.
A trip to Italy, the place of my family roots, changes something that is deeply buried in me, something transmitted from my lineage. While hiking in the mountains, I have the chills and feel I need to deposit, at this spot (photo), the pain my mom and my ancestors have endured on this land, and reclaim the pride of being of Italian descent. The same year, I decide to let go of my writing business to dedicate my time to Yoga for Renewal and build its foundation in Atlanta. 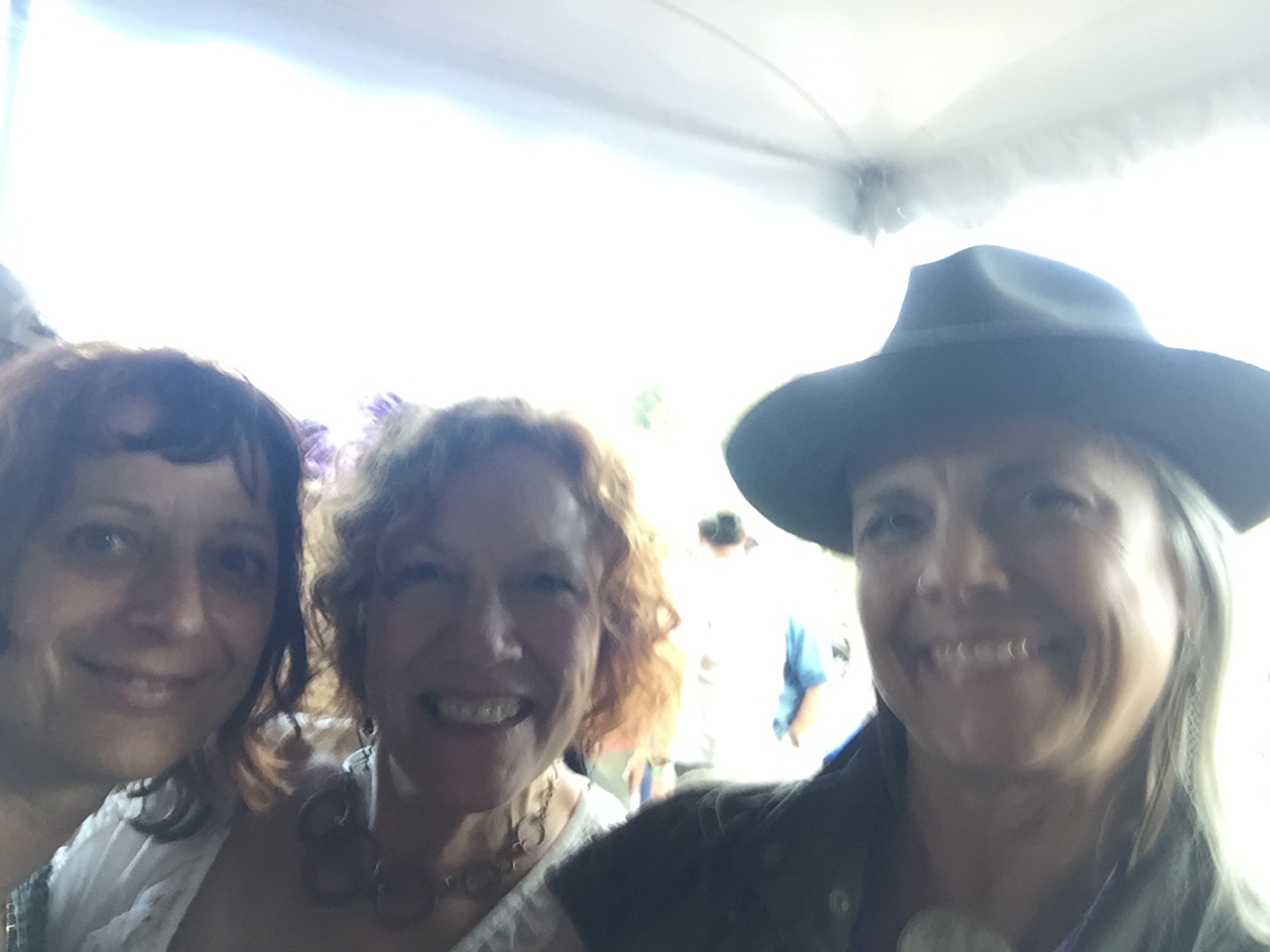 2017.
I find my voice with my blog and I walk Yoga for Renewal from the toddler's stage to the young child's stage. It's now clear--what makes me tick is to help people process feeling that have been buried alive through the yoga practice and the healing circle. I start establishing the brand and the protocol in Atlanta with a three-day workshop and a group class series at Vista Yoga. Another group class series is planned at Candler Park Yoga. This is also the year of connectedness, festivals, new friends, new community, dancing and music. The journey to be me continues. 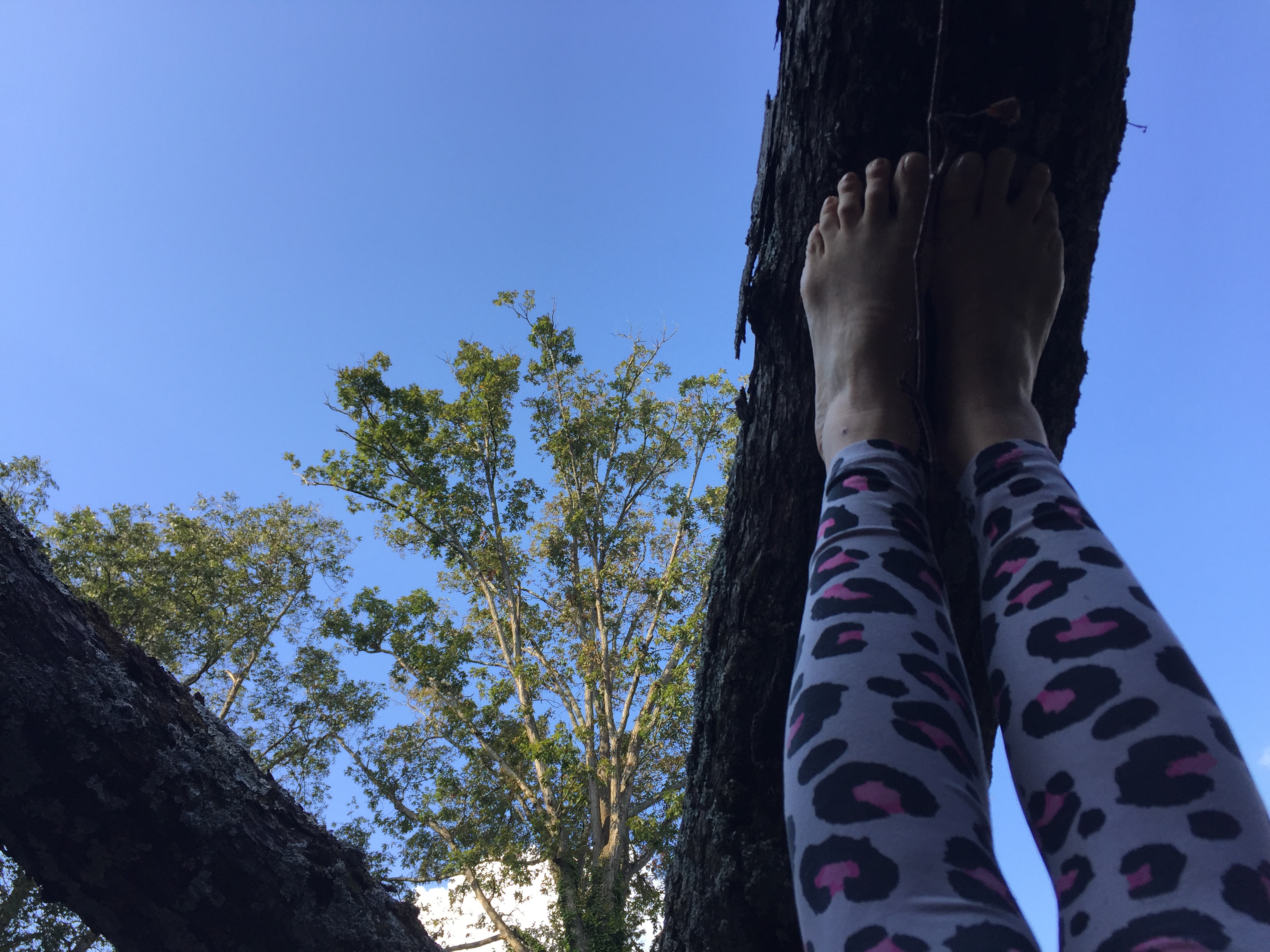 A couple of days ago, lying and finding balance and support on a branch of the huge old oak tree that lies on the ground in my backyard. On Sept. 4, the tree looked so strong it seemed it was going to be there for ever. Irma and its winds brought it right down later that day. If the oak tree had fallen the opposite direction, it would have crashed the place where my neighbor, Ronika, her family and I live. As she put it,"We're blessed!"

Here's the story of how, as a double cancer survivor, I found what breast cancer means to me as an illness. Maybe this story will make a difference in a life out there. Maybe yours.

Breast Cancer Awareness Month helps me recognize my humanity through my two biggest battles —a first bout with breast cancer in 2004 and a second one ten years later. I also reflect on my sister fighters, survivors and thrivors –whatever we feel we are--, and on my sisters on the other side.

Let me share a (real) story that will tell you what breast cancer means to me as an illness. Hopefully, it won’t have anything to do with your own self at all. Or maybe it will resonate for you, or for someone you know. If that’s the case, my hope is that it will make a difference in your life or someone else’s.

January 2015. I’m coming out of the woods after being diagnosed with breast cancer seven months before. I’ve found a refuge at my parents’ home, close to Paris, and I’ve finished the big chunk of my treatments –surgery and six rounds of chemo. My hair is (temporarily) gone, and the incision and infection following my surgery six months before, won’t heal. My father is fighting his own battle against lung cancer, and my marriage is on the edge of a cliff. Thank goodness, I manage to keep the infection localized, despite chemo, my tribe’s here, and my writing client has put me in charge of a fun, global video project.

Along with the medical treatment, I begin the process of spiritual treatment, with the first step being to finally recognize who I am, instead of looking for others to recognize me. What are my dreams, beliefs and values? What makes my soul unique? Do I love my husband? Do I want to go back to Atlanta?

I have the answers deep inside. I feel I still need confirmation. That’s when I call Caroline Quemerais, an astrologer and healer, for answers.

When I step into Caroline’s home office, in the ‘hood right outside of Paris, I feel uneasy. I contemplate getting up and leaving, but, within seconds, decide to stay. She looks at her screen, on which she reads my astrology chart.

“Your father was not present by your mother’s and by your side when you came to this world. His absence was powerful. It gave you the unconscious message that you were not good enough for him to be here. This has shaped your intimate relationships. Ever since, you’ve chosen men who are absent when you need them, and you’ve over compensated to be accepted and loved by the men of your life”. I freeze while Caroline talks. Her conclusion resonates even deeper in me, “that’s what breast cancer is about. It’s about a woman’s belief that, in order to be loved, she needs to give—a lot. It’s about giving so much, and feeling it’s never enough, that she grows a third breast—a tumor.”

The appointment lasts a long, intense hour where so much is said that I’ll end up with a bronchitis the next day. I’ve since realized that I prefer working with healers that leave certain things unsaid. That day, though, Caroline tells all.

She sheds the light on positive information, too. “It was difficult for your father to decide to be away when you were born. He had to work far away from home to take care of his family’s needs. That’s love too. You can see that now.”

While listening to Caroline, I remember what my father had confessed to me as soon as he was diagnosed, six months before, “When you were born, I was up North (of France), working on building a school and supervising a team of four workers. I could have dropped everything to be with your mother. Then, I would not have been paid and neither would have the other workers. We all needed the money--badly. So, I decided to stay another two days until we were going to be done, and then run to see you.”

I hear Caroline saying these words over and over again, “Play the princess! Be a princess! Be loved for who you are, not for what you do!”

You, too, may want to say those words, to yourself or to a woman you think needs to hear them.